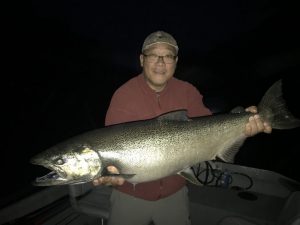 The salmon family or Salmonid, includes the King Salmon, Steelhead, Brown Trout and whitefish. All are characterized by adipose fin, and have a preference for cold water with high oxygen content, making the Great Lakes an ideal habitat.

The Chinook was a fairly new variety of salmon when introduced into the Great Lakes in the 1870’s. Sometimes called “King Salmon”, these fish did not reproduce successfully and eventually disappeared. In 1966, Great Lakes states, Michigan, New York and Wisconsin, with the help of the province of Ontario reintroduced the Chinook. Great Lakes populations of Chinook are maintained by annual stream stocking programs.

King Salmon live in Great Lakes shoals or near-shoal waters (less than 100 foot depths) as a rule. In the fall the King Salmon move into the southern reaches of each of the Great Lakes, traveling 5-15 miles offshore as they go. In the spring the King Salmon retrace their route and by the following fall, they congregate at the stream they began their journey at and begin their spawning runs upriver.

King Salmon spawn in streams over beds of large gravel, near riffles. Within two weeks after spawning, adult chinook die. Chinook compete with other salmon and trout for scarce spawning grounds. The following spring the eggs hatch, usually when water temps are around 37 degrees and the young usually remain in the river for one year before they migrate down to the lake.

Anglers prize the King Salmon partly because of their large size and the challenge they present for fishing, you can target King Salmon in the rivers from mid August thru mid October.