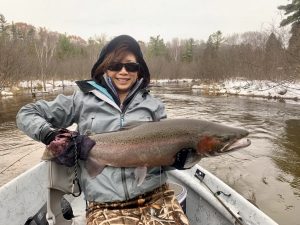 Steelhead is a name given to rainbow trout which live in the Great Lakes. Rainbow trout are native to the Pacific Ocean along North America and to rivers and other fresh waters of North America west of the Rocky Mountains. Steelhead are a popular game fish, and for this reason have been introduced all over the United States.

Great Lakes Steelhead are usually found in waters less than 35 feet deep at temperatures of 58-62 degrees F. They are often found near stream outlets, especially in spring and early summer. In the lake-dwelling part of their life cycle, they wander along the schools eating plankton, minnows, surface and bottom insects and other small fish if available.

Great Lakes Steelhead enter their spawning streams from late October to early May. Most spawning occurs in the spring, although Steelhead have been known to spawn in late winter months. Spawning takes place in a bed of fine gravel, usually in a riffle above a pool. Steelhead don’t necessarily die after this; they may live to reproduce for as many as five successive years. Most steelhead return to spawn in the stream in which they were born or planted.

Steelhead eggs hatch in four to seven weeks, depending on water temperature. Young steelhead may travel downstream to the lake in their first summer, or they may remain from one to three years in their home stream before migrating to the lake.

Individual growth varies greatly even within the same population. Most Great Lakes Steelhead reach sexual maturity at age three to five years. A mature 16-inch fish living in the Great Lakes may continue to grow throughout its life and could reach 36 inches in length and up to 20 pounds in weight. However, average adult size for Steelhead is 8-10 pounds, while life expectancy in the Great Lakes is six to eight years.

Larger fish, fish-eating birds, mammals and sea lamprey are the Steelhead’s natural enemies. In turn, the Steelhead finds itself competing with other salmon and trout, other predatory fishes and a variety of bottom feeders, for its food. It also competes with salmon and trout for spawning grounds.

Steelhead are valiant fighters and can be caught with many different methods. An unbeatable combination that makes them one of the most popular North American sport fish.