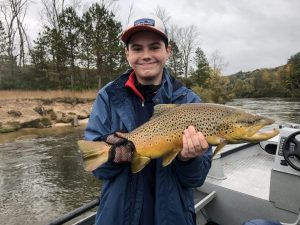 Brown Trout are close relative of the Atlantic salmon, and also were brought to North American waters as exotics. These natives of Europe and western Asia were introduced into the Michigan waters in 1883 and now thrive statewide. Brown Trout have thrived in their new home, and have become firmly established in all of our Northern river systems, as well as some southern rivers.

Brown Trout are a wary fish, they hide in logs and rocky, bolder-strewn areas, and prefer a water temperature of 52-60 degrees F, but can withstand much warmer temps as the summer heats our river systems. Brown Trout spawn in tributary streams in late October and November, Brown Trout spawners choose shallow, gravelly or rocky areas. The female creates a shallow depression (redd) in the gravel, in which the spawning fish deposit the eggs and sperm. When the process is completed, the female covers the redd with gravel.

The average Brown Trout adult will measure 14-16 inches in length, although some can grown to be much larger. Young Brown Trout are preyed upon by larger fish and by predatory birds such as mergansers, king fishers, and Osprey. The diet of adult Brown Trout includes insects and their larvae, crustaceans, amphibians, small rodents and other fish. They enjoy a rather long life span, it appears, since researchers had observed them at up to 8-10 years of age.

Brown Trout are active both day and night and are opportunistic feeders in larger river systems, Brown Trout seem to be photo sensitive and are usually more cooperative on rainy or overcast days rather than bright and sunny days.